Unlike their Metropolitan counterparts regional police records have never been viewed as public records and each regional force has traditionally devised its own policies around what to retain or destroy.  This has led to widespread inconsistencies in the availability of resources for historians.  Employing methodologies from cultural and oral history, memory and archive studies as well as material culture, two strands of research will aim to examine the relationship between regional police forces, their information and ultimately their history.  The first strand will take murder files as a paradigm artefact imbued with complex and unique attributes, and through mapping the “life-cycles” of those that are now in the public domain examine the role that emotion, culture and law has played in their survival.  The second will pose the theory that police officers can act as “gatekeepers of information” where institutional pride and professional souvenir keeping are believed to play an important but undocumented role in the preservation of police records, and this theory will be explored through an oral history project with retired police officers. Research will be delineating unknown spaces and the historical timeframe of the project will be set by these “public” murder files which date from the 1920s to the 1980s.  Research will contribute towards a better understanding of the police’s relationship with their history and information and potentially offer solutions for the preservation of future resources.

Trajectory of artefacts from the Ruxton murders
Image by Angela Sutton-Vane, 2015 – click over image to open document

The Turkish hand-knotted carpet in the West has been described as an object of desire, its representation in art closely scrutinised by carpet scholars, with many books written about it for collectors and novices alike. It has rarely been examined, however, as a biographical object, or as an object that has been present in England for hundreds of years and, as such, has developed its own unique material culture. This research brought together the carpet’s origins in Turkey against the background of the Ottoman Empire; the causes of its arrival in England and the lives of key players in its status as an object of desire. Research also brought the story into the 21st century through field-work at sites currently containing Turkish carpets, in order to develop an understanding and insight into how the carpet is used and perceived as a cultural object.

For me, an important part of the research was acquiring an understanding of the processes and complexities of hand-knotting, so I attended Louise Cottey’s weaving lessons at Coldharbour Mill in Devon where I painstakingly hand-knotted a tiny fragment of carpet. 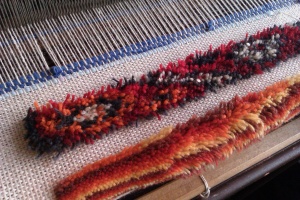 Microscopic image of cross-section of paint and gesso layers;
Photograph by Angela Sutton-Vane, 2001

My final year project was the conservation of an early 19th century Spanish polychromed carving of St. Tobias and I also completed a 3 month placement in the Conservation Studio at the Horniman Museum in  South London.  Here I worked on a badly deteriorating Uvol Dance Crest to prepare it for redisplay.  My dissertation was titled “W.G. Rogers and the Restoration of the Great House Carvings: Did He Help or Hinder Their Survival?”.  This examined the long-term effects of the treatments carried out by the Victorian carver and restorer on a number of key carvings by Grinling Gibbons. 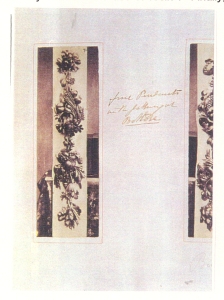 All images and documents on this site are copyright to Angela Sutton-Vane, unless otherwise stated.  Please contact me if you would like to use any material – generally I will be more than happy to grant permission for educational or research purposes.

One thought on “Research”